Medieval Music in a new and progressive style

We made a record and called it The Roots of Gral

The first joint album of our contemporary musical ensemble are built on the simple, yet very creative concept, which (we believe) deliver to a wide range of listeners. We called the album The Roots of Gral - referring to the band from where we all started. Listen to samples of songs.

Update Required To play the media you will need to either update your browser to a recent version or update your Flash plugin.

We play on unique instruments

So old they’re new again! Our instruments are a perfect imitation of their historical patterns which together with our own suggestions of structural modifications makes the sound of each instrument original and inimitable.

The favourite instrument of the Medieval street musician with an instantly recognisable sound, they can be found in a number of variations: The Czech Folk’s Elbow Bagpipes, the Spanish Gaity, the Irish Elbow, the famous Scottish War Bagpipes, which were used in battle to intimidate the enemy. This one are closest to the medieval bagpipes. We designed original construction which allow us compare to all of the above listed options to play subbass, therefore, extremely deep tones. Origin of bagpipe are unclear, the principal of bag whistle, however, were already known to the ancient Greeks, who were interested in the possibility of uninterrupted tone. Already then it was mainly goat or cow skin used for the bladder - as we use it until now.

The word Shawm evolved from the Latin concept of Calamus, which means reed or straw. The Shawm is form of Reed Pipe and it came to Europe probably with the Moors, who conquered the Iberian Peninsula around the 7th Century. It is the front of the whistle bagpipe accompanied by extension mouthpiece into which the air is not coming from bag but directly from the mouth of the player. Same as bagpipes the Shawm has been widely used in military music.

Fiddle is a direct predecessor of today’s string instruments such as the Violin, Viola, Cello and Double Bass. It is also one of the most common instruments of the Middle Ages. It evolved from the ancient Lyre, and we can find the first mention of it in the gospel from the 9th Century. Originally it had three to five strings made of gut, and it was leaning on the shoulder or vertical on the leg. The advantage of this tool is raw and novel sound.

Cittern is the youngest of these instruments, it reached the peak of its popularity between the 15th and 18th Century, under the names of Gittern, Zitter, Sister or Cytherne, Cittharne. It belongs to the family of Lute instruments developed in the Mediterranean region of the previously mentioned medieval Fiddle, when playing with the bow was replaced by using plectrum. Classical Cittern had one neck, and eight to ten strings. In our band, you may encounter a unique Cittern with two necks that combines two separate instruments - the aforementioned Cittern and Lute Guitar.

The instrument was imported to Europe from the Arabian Peninsula, and even the name “Lute” in the various language modifications is taken from Arabic - ’Ud, which translates figuratively as wood. It arrived to European continent from three different directions. Firstly over Maury occupation of Spain in the years 711 - 1492, then when Sicily was attacked by Arabs in the 8th Century and, last but not least during a trade with the Middle East. Lute doesn’t have its historically anchored form, it occurs in many different versions, which differ not only in shape, but also tuning. After the regression of the late 18th Century, it’s enjoying increasing interest and popularity with the players and listeners.

At the end of 12th Century there is a new instrument appearing in Europe called Citola, which appearance and sound comes from the Greek lyre. In this period it were jugglers who had closest to this instrument and besides playing citola they had to know how to play on bagpipes, shawm, hurdy-gurdy and drums. Our citola honours preserved historical sources, particularly the original shape of the tool body. Because of tuning, which is identical to the bass or bass guitar, it is much bigger.

The Djembe’s history dates back around 200 years to West Africa. For the drum head is used skin from African goats, because unlike Europe goats they have a rougher texture and are more suited to sound needs. Corpus or body of the Djembe is hand-carved from a single piece of wood, which was at the beginning the part of the whole tree trunk. For these purposes, the most commonly used type of wood are various kinds of African mahogany.

Predecessors of today’s drums come in many different forms, from the very beginning of humanity, when they were applied primarily for ritual and cult purposes. The drums themselves came into European culture in the early Middle Ages, in the time of Crusades. Mainly due to technical and sound defiances of these drums we do not include them in our production, but we reach out for more distinctive drums as African or Arabic which in original and appropriate manner revive our creation. The current band’s instrumentation is a large bass drum called Davul, African Djembe, Arabic Darbuka, Tambourine and classic drum set in medieval garb, which we use for the larger stage-play.

We are all musicians who have graduated are currently playing professionally in a variety of musical projects. 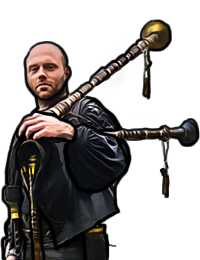 A graduate from the Conservatory of Pardubice, his specialism is the clarinet. Trained businessman and proud father, Josef is currently making music only as a hobby. 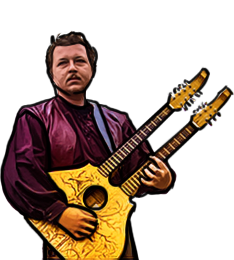 Like others in the band Igor studied at the Conservatory of Pardubice, then Academy of Performing Arts in Prague and the Toho Gakuen School of Music in Japan. He has a range of experience playing in orchestral and chamber ensembles and has collaborated with the Czech National Symphony Orchestra. While studying Igor frequently participated at the International Festival of Music Masters Course in Japan and worked with George Michael on his Symphonica tour. 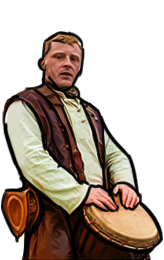 As well as being a graduate of the Conservatory of Pardubice, David is also a Drummer in the Czech military. A Teacher for many years and a member of the Old Prague galleries band. David is a seasoned musical player, he is also the Band’s designated ‘heartthrob’. 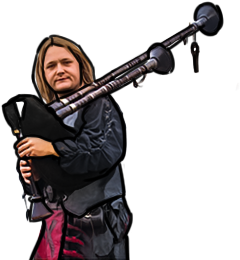 A Graduate of the Conservatory in Pardubice and Educational faculty of University in Hradec Kralove, Karel worked at the festival Shakespearience in London. He has also toured with Cantus Buranus 2 of band members Corvus Corax in Germany. Karel is a multi-instrumentalist and is devoted to teaching, composing and musical directing. 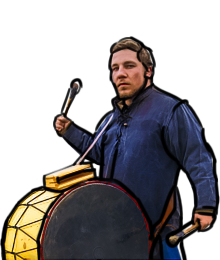 Where can you hear us?

Our band was found in 2009. Since then we visited lots of medieval events at castles and chateaux in Czech Republic, town festivals and themed markets. Not to forget our shows in medieval taverns. Thanks to our international cooperation we perform in Germany, Austria, France, Belgium, Luxembourg, Poland and Greece. For our latest news please visit our Facebook page.

More about us Hide text

What type of event is this band good for?

Our period instruments, costumes and songs will naturally be best in a historically harmonised environment. It always depends on the nature and character of the event and the previous agreement with the organiser.

We usually play with 3-5 members and have 3-6 sets of 15-20 minutes. We also participate in parades and have the ability to play full-length concert of 1.5 hours. Our production can be tastefully complimented by oriental dancer. We can provide a complete medieval program of your liking.

We would like to come play at your wedding, birthday or corporate party. We are able to be lively and bring energy to any event but please do not expect typical party band. We can not musically entertain your guests throughout the whole night at a whim and we do not play contemporary songs on demand.

Each program is always tailored to suit unique original character of the event, venue and number of visitors. We can offer basic program which includes music and dancers or more advanced packages which can include fencers and jugglers. There is always a fire show involved in various stages of our program.

The goal of our educational programs is primarily to rise awareness of medieval music. The standard teaching music education in schools starts approximately in the Baroque period, but our program focuses on a period earlier, mainly Gothic, which in primary education is often neglected. The concert is a blended with spoken word and screenings of contemporary illustrations. One of the benefit for the students is that they can see historical costumes and replicas of period instruments which help them to picture real Medieval life and music.

Music for the wedding

We would love to play music at your wedding day to make it unique and unforgettable. As a wedding package we can provide your ceremony with modern or classical music in formal wear and contemporary instruments such as violin, keyboard, guitar, bass, flute, cajon, or a drum kit.

Part of our planning includes a discussion about a playlist of your favourite songs. Please keep in mind that practice is not a matter of one day, and in this case the following idea always applies: The sooner you let us know the better.

After the ceremony, the music can follow you to the wedding table to enjoy the festive atmosphere of live music. During this time, we can play background instrumental music of The Beatles, Sting, The Doors, Led Zeppelin, Elton John, film songs and classics. For the last entrance we can perform in our historical costumes and replica period instruments to play a one hour concert of medieval music, before handing you over to your ‘traditional’ band or DJ.

We are happy to split in half for you. Given the number of band members we are able to play multiple events at the same time on the same day.

If not agreed differently, we aim to arrive at the event at least one hour before show.
We are based in Chrudim (Czech Republic) and are happy to travel anywhere in Czech Republic and further.
When booked for two or more day events the organiser needs to provide food and accommodation.
Depending on space and number of visitors we are able to provide our own sound system.
We sound check only our own instruments. We do not rent our sound system.
In case of bigger event the organiser needs to provide a sound engineer.
Stage plans
Price of our programmes depends on various factors - number of musicians, number of sets required to play, mileage. For a quote please contact us on our e-mail.